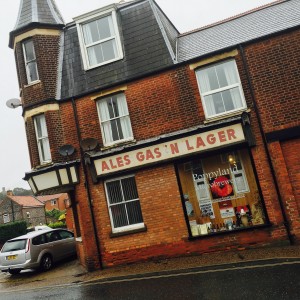 I’ve been visiting Norfolk for a few years now, and over the last two or three visits I have been hunting for Poppyland beer pretty much as soon as I arrive.
This year I decided it was about time that I went to visit the micro brewery that lies in the heart of Cromer and have a good chat with Martin (@cliff_bunny), the owner and brewer, in fact the sole member of staff.
We’d spoken a little by email over the last year or two and I really wanted to say hello in person and so I found his mobile number on his website and sent a quick text message.
And so it was that on a damp October morning I knocked on the door of the wonderfully odd little building that was once Allan’s Garage and now houses Martin Warren and his amazing little brewhouse under the heading of Ales Gas ‘n Lager.
“It’s just how the letters fell,” explains Martin when I ask about the sign above the door, “I could see the word Ale in Allan’s Garage, and the rest just fell into place. I didn’t even have to buy a new sign for the front.”
It’s that softly spoken and subtle wit that immediately warmed me to Martin and I was fascinated by him, his life and his brewery.
He had come to the Norfolk coast when he took the position of Curator at Cromer Museum, building up the collection and falling in love with the local landscape. 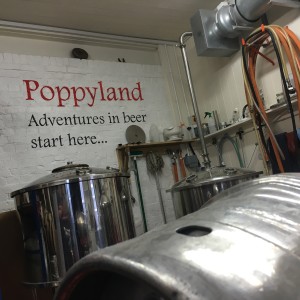 A Geologist by training, he has a pin sharp inquisitive mind that means he is constantly at work in the brewery whether or not it’s a brew day, and when I was there he explained to me how he’d just returned from a trip to Norway to learn about traditional Norwegian Farmhouse brewing techniques and was building himself a Kveikstokk, a beautifully intricate wooden frame on which to grow yeast.
I asked Martin about his brewing and the remarkable little building that houses his business and his enthusiasm flooded out.
“I first brewed from kits in the early 70’s but that died off when I started work, and it wasn’t until a few years ago when we renovated the kitchen that I realised there were enough work spaces of different heights to allow me to make beer again,” he smiles, “and as for the building, I live just across the street and I love this building. It was a bit grotty when I moved in and needed a lot of work to get it to the point I’m at now.” 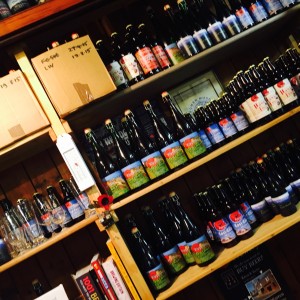 We move from the little brewhouse into the “Bijou”, Martin’s word, office and bottle shop, which is just big enough for the two of us to stand up next to each other and lined with shelves of bottles.
With its creaking wooden shelves, it looks a lot like the store room of a beautifully kept museum, and the brightly coloured labels jump out from the dark brown of the wood surrounding us.
Martin starts to tell me about foraging for local ingredients for his beer, and his love of the local landscape, especially the coastal paths and cliff tops, is front and centre of his explanation.
He’s using lots of foraged flora and fauna and currently immensely excited about putting them into sour mash beers to see what happens, and I’m very excited to be handed a couple to try just before I leave.
On saying goodbye I am filled with a joy that comes from talking to someone with such an infectious enthusiasm and can imagine how interesting the guided coastal walks that Martin hosts must be, telling my family when I get back to our caravan that on our next trip to Norfolk we’ll be taking part in one.
Poppyland Brewery makes some very good, very inventive beer.
It’s not a brewery trying to grow in size and scale, but a brewery trying to grow creatively, and Martin has no plans to expand from his little brewhouse on the road to Morrisons.
But if you’re in the area you simply must find yourself some Poppyland beer and somewhere to sit and take it in, preferably with a view of the sea, because Martin’s beer deserves to be discovered.

Poppyland doesn’t have a core range but instead the beer that is made is inventive and sometimes experimental.
This is what I picked up while I was there: 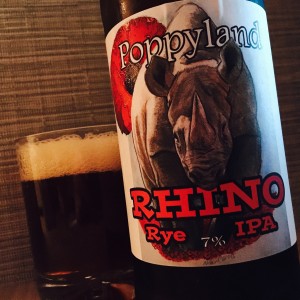 Rhino Rye IPA (7%)
Pouring a deep red amber with a big frothy head and named in honour of the fossilised Rhinoceros that was found on a local beach, the aroma of this Rye Beer is salted toffee and yeasty bread dough.
This is a beer with a big malt bill, a malt bill that’s round and chewy and full of good things.
You find a thick treacle tart base, honey and wafers, and lots of meaty, almost bloody, rye goodness.
You know that earthy pumpernickel thing that makes rye beer one of my very favourite things in the world?
Yes, that.
And across this the hops are sharp and zesty, packed with lime leaves, mandarin zest, mango and pithy woodland greenery that lead you to a super long dry bitter finish that ‘s warmed through by a hefty alcohol hit. 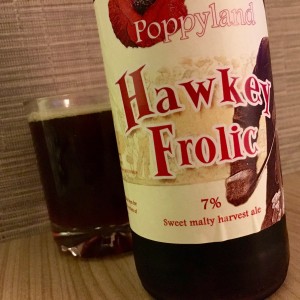 Hawkey Frolic (7%)
This “sweet malty harvest ale” has been brewed as a celebration of the fiftieth anniversary of Maris Otter barley and uses an authentic 1958 Norwich yeast.
It’s a lovely beer, too.
Big and bold and sweet and sticky, it’s Poppyland at its best, packed with flavour and not afraid to challenge.
The aroma is red fruit, liquorice and honey, and the beer sits a deep ruby red in my glass.
The malting is absolutely enormous, but then that’s what this beer is all about.
You find a lovely round chewy toffee and aniseed, bran flake and honey gloopy body that’s surrounded by tamarind and Weetabix, the yeast adding a very good earthy spice to the background.
The hops are sharp nettles, lemon rind, bracken and green herbal leafy hedgerow that lead you to the long boozy sherbet coated dandelion and burdock finish. 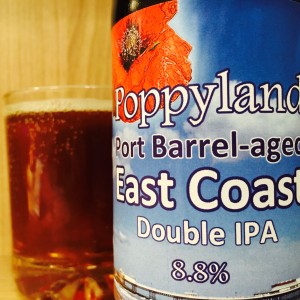 Port Barrel-Aged East Coast Double IPA (8.8%)
Man alive, this little bottle of beer – one of only 100 made – is a beast.
A big beautiful beast, but a beast nonetheless.
Pouring an innocent looking pale gold, the aroma is stewed strawberries, jelly sweets and boozy honey.
There’s a round chewy Maris Otter malt that’s full of gloopy caramel and shortcake biscuits forming the body of the beer and over it there’s a resinous piney hop that’s sharp with grapefruit and mandarin zest.
And enveloping all of this is a wonderfully damp woody fruitiness from the barrel ageing.
You find a hint of mushroom and a warm leaf litter earthiness that’s fired by a good alcohol heat which leaves a tannin dry plum and date finish.
As I said, a big and beautiful, if dangerous, beast. 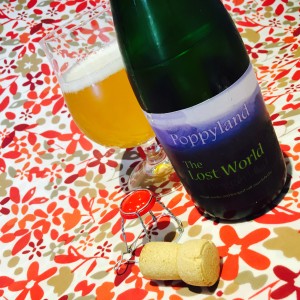 The Lost World Of Doggerland (4.9%)
Brewed with smoked wheat malt, sea purslane, fennel and sea wormwood, this is an absolute gem of a beer.
The aroma is a warm round lightly spiced sour dough and meadow flower bouquet, and the beer sits a pale gold in my glass.
There’s a shortcake, candy floss and honeycomb malt, it’s creamy and soft and infused with a toasty smokiness, and the hops are sharp and spiky hedgerow greenery over the top.
And then there’s a decidedly salt tinged aniseed hit and a pithy bitterness from the purslane and wormwood that prickles away at you as you head towards the long floral dry finish. 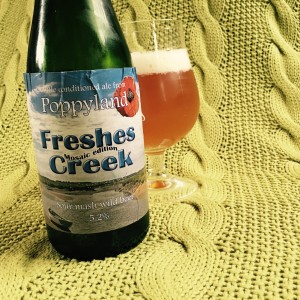 Freshes Creek (5.2%)
A sour mash wild beer dry hopped with Mosaic, this beer – an edition of only 72 bottles – is every bit as good as it sounds.
For some time now it’s been de rigueur to brew sour beers and Saisons and some have done it far better than others, but with this beer Poppyland have managed to find a depth of flavour and texture that blows most others out of the water.
This glowing peach coloured beer smells big and fruity, packed with mango and nectarine and a little honey on the side.
As you take a sip you find the beer feels thick and mouth coating, chewy with toffee and bruised apple cores, it has a delicious tarte tatin pastry softness that offsets the super fresh zingy sourness that leaves a dry bitter lemon rind and metallic basil finish that’s gently infused with a gala melon juiciness. 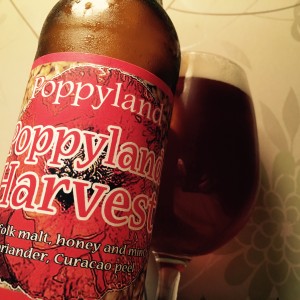 Poppyland Harvest (6%)
This one’s a collaboration between Poppyland and The Norfolk Brewhouse and it’s a good Pale Ale with a bunch of extra stuff thrown in.
Brewed with locally grown floor malted Maris Otter barley, honey, mint, coriander and Curaçao peel, this is all far too easy to drink for its ABV.
The malting is a fresh well baked crunchy biscuit coated in caramel and the honey adds a big round richness over which the mint and coriander work together to give a fresh spicy snap while the Laraha (if I recall, this is the correct name for the fruit used in Curaçao) peel adds a soft orangey backbone over which the hops are a green and leafy herbal hit.
Poppyland Harvest beer you can swig in great big gulps until you realise your head feels wonky.

Visit the Poppyland Website here and read Martin’s superb blog.
Thanks to Martin for his time and hospitality.