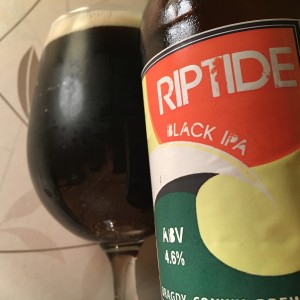 Conwy’s Black IPA is actually alright, but then I suppose just by the law of averages I was eventually going to find a beer from this brewery that I thought was OK.
And when I say it’s alright I really do mean nothing more than that, it’s alright.
Relative to all the other Conwy beer I’ve tried it’s a definite step up, but it still manages to be thin and watery and a bit underwhelming.
There’s a light blackcurrant and chocolate aroma which continues into the initial flavour of the beer and is joined by toffee and biscuits.
And there are some snappy hazel and chamomile tea hops that pop and crackle and lead you to a decent enough dry bitter finish.
But there’s a bit of a gap right in the middle of this beer, and it’s a gap that the flavours seem to disappear into meaning that the beer feels rather thin.
Alright, it’s alright, alright?