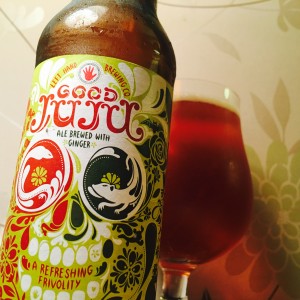 A Ginger Beer in the truest sense of the term, Good Juju is really rather pleasant.
There’s a big stem ginger aroma as you open the bottle and pour this light golden beer into your glass, it’s a very appetising smell that’s tempered with candy floss.
But when you take a swig you find that the ginger isn’t anywhere as big in the flavour as it is in the smell.
And that’s a good thing.
In fact it’s rather like a Ginger Nut biscuit in its salted spicy sweetness.
There’s definitely a well baked biscuit feel to the body of this beer and the crisp green herbal hopping tinged with lemon juice adds a refreshing hit.
On the whole though, this tastes like a yummy ginger beer that happens to have alcohol in it, and I’m perfectly happy with that.