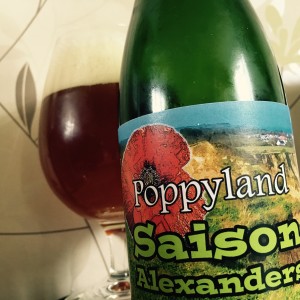 Brewed with Alexanders, an aromatic coastal herb, gathered on the cliff tops surrounding Cromer, this Saison is something else.
It pours a deep amber with a big fluffy head and smells of honey, straw and meadow flowers steeped in white rum.
The malting is thick and gloopy, all toffee, caramel wafers and bread dough, and the hops are green herbal foliage with a good lemony kick right at the end.
As for the Alexanders, they give a lightly salty, celery like flavour and the addition of coriander adds a good snap that cuts through the boozy heat as you head towards the pithy dry finish.