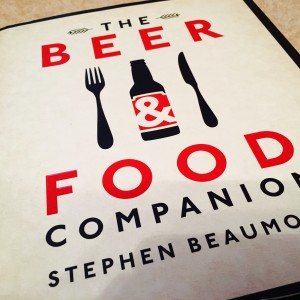 Presented as a beautiful hardback full of lovely colour plates, Stephen Beaumont‘s Beer & Food Companion is really rather good.
It opens with a section on beer, how it’s made and it’s various different styles.
It’s a whistle stop tour and doesn’t tell the beer geek anything they don’t know already, but it’s well written enough to have you reading it anyway.
Most importantly, if you were buying this for someone new to beer, who is just dipping their toes in the waters of geekdom, this opening section is a concise education.
But the really interesting parts for me were later on, where you find interviews with chefs and brewers from across the world, articles on beer and food pairing and towards the back some very tasty looking recipes. 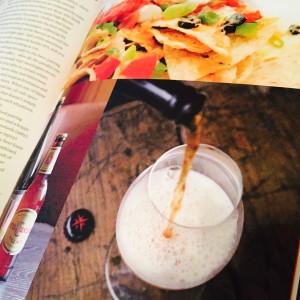 In fact I’ve just flicked through the book again and, looking at the photograph, I want a Hop-Aged Cheddar & Tomato Grilled Cheese sandwich for my breakfast thank you very much.
The book closes with a beer spotters field guide to beer styles and food pairing which is well presented but difficult to use out in the open unless you’re happy carrying a large backpack full of hardback with you on your beer travels.
All in all Stephen Beaumont has a created a well researched and well written book that is a must for people who are beginning to discover what beer can really be and will make a rather nice little present for the beer geek in your life to add to their library. 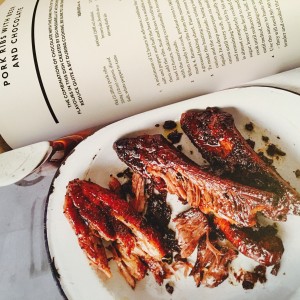 You can win a copy of Stephen Beaumont’s Beer & Food Companion courtesy of Jacqui Small & Quarto Publishing by answering the following question:

Which beer won the 2014 CAMRGB Beer Of The Year Award?

Email your answer to hq at camrgb dot org
A Name will be picked randomly from correct entries and the closing date for the competition is October 31st.