The Return Of A Shropshire Lad: The Salopian Brewery Launch

I have lived in all sorts of places from Jamaica to Italy, Cornwall to London, but I never feel more at home than when I’m back in Shropshire.
It’s where my heart sits, where my family is, it’s a part of me.
And so having a brewery as good as Salopian making beer in my favourite part of the world makes everything that little bit better. 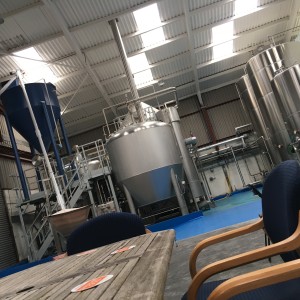 Until last summer, Salopian were based in a little brew house in Moele Brace, just south of Shrewsbury town centre and had been making some very good, standard beer for a few years.
When I first met them Jake had not long been a member of the team after moving over to Salopian from Oakham, and he had ideas of what Salopian could become.
By last year Salopian had quietly become that vision, with a range of very good standards like Darwin’s Origin and Oracle, and the new “Black Label” range of more experimental, dare I say “Craft” beer, from the awesome Sentinel to the sublime Polygraph.
And by last year Salopian had truly outgrown their brew house and needed to move.
They crossed Shrewsbury to a small village just north called Hadnall and there built a brand new brew house with lots of expansion room, space for their own bottling line (which isn’t there yet, but looks to be on its way fairly shortly) and got to work settling in.
Now well and truly settled, the brewery opened its doors to a select bunch of friends, employees, family and business partners and I was fortunate enough to be invited along.
The brewery sits in beautiful countryside next to the railway line and the shiny new bespoke brewery is modern and clean and full of promise for the future. 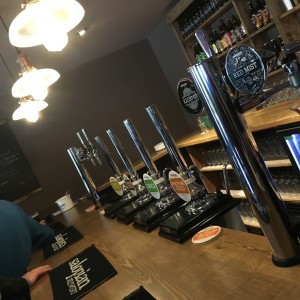 We were given a short tour and invited to ask questions and take photographs before returning to the bar that sits in the front of the building.
Salopian had gone out of their way to make the day welcoming and, above all, beery.
The bar was free and along it stood four hand pulls offering the brewery’s core range of Lemon Dream (4.5%), Darwin’s Origin (4.3%), Oracle (4%) and Shropshire Gold (3.8%), and four keg lines serving Polygraph (7.4%), Kashmir (5.5%), Bulletproof (5.8%) and Salopian’s collaboration with BrewDog, Red Mist (5.5%), and just for good measure there was a fridge full of other black label bottles, Sentinel (8.4%), Holly Bush (5.5%), Dead Drop (4.7%) and Boomerang (6.9%) amongst them.
We sat and drank and talked and milled about, a room full of happy faces all keen to talk and taste and generally enjoy the afternoon while being fed pulled pork and smoked brisket.
Jake rushed around trying to speak to absolutely everyone and beaming with pride about what he and Wilf and the rest of the team have created and I felt a chest full of pride watching people who have become good friends showing off their new place to us all. 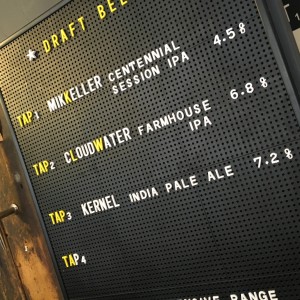 The day had actually started with a brief walking tour of Shrewsbury as my friend Chris had never visited the town and I wanted to show him around.
We wandered for an hour and then headed to Chez Sophie for crepes and beer and to meet up with some friends that would be coming along to Salopian with us.
Cloudwater’s Farmhouse IPA (6.8%) was an excellent start to the afternoon but I’d drunk it before my lunch arrived and as a result was forced into ordering a Kernel IPA Nelson Sauvin Centennial (7.2%) to help eat up my lovely pancakes.
And after our afternoon of celebration with Salopian we returned, slightly worse for wear, to Chez Sophie for a natter with more friends and a couple of bottles, namely Brouwerij Kees Pink Grapefruit IPA (5.5%) and Evil Twin & Beavertown’s XXX (9.5%), before catching a train home.
Adn that’s where this chapter of my tail ends as I have absolutely no recollection of the evening from the moment we left Chez Sophie to waking up in my mum’s house on Sunday morning. 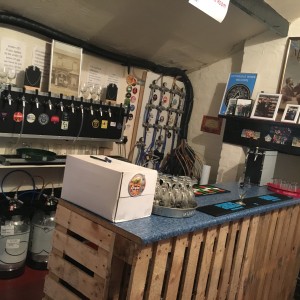 The Aladdin’s Den that is Cotteridge Wines.

Somehow we had navigated the trains and a ten minute walk without incident and after bacon sandwiches we headed to Birmingham to visit the chaps at Cotteridge Wines.
We were there ostensibly to organise a CAMRGB tasting event in Cotteridge’s ace little tasting rooms at the back of the shop, but before that we needed a little drink and Cotteridge had got Brodie’s marvellous Soho Superior IPA (7.4%) on draft so we just had to have a third and a natter in the sunshine at the back of the shop.
You see, Cotteridge now have a little courtyard with seating and tables overlooking the railway line and in the summer it’ll be a lovely space for a beery event, and so we sat there for an hour and talked beer and friendship before wandering the aisles looking in wonder at the bottles on sale.
But then it was time to go, a train back to Leicester was calling and the weekend had started to get just that little bit overwhelming and so, after a quick swig of Siren’s Dinner For Seven (4.1%) a crisp and clean Vienna Lager, we legged to back to Leicester. 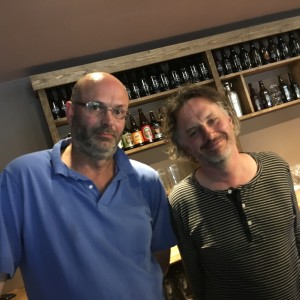 And sitting here in my kitchen, the blackness of an autumnal morning through the window, I can’t help thinking how lucky I am.
Not lucky in terms of beer, though I realise that I am very lucky in terms of beer – albeit a lucky that I work hard to create – but lucky in terms of the people I know and the network of friendships I’ve made as a result of beer.
I love Shropshire, it’s my home, and I love my friends, and amongst them are the Salopian Brewery team who have created something a little bit special in the heart of my home.
I am blessed.