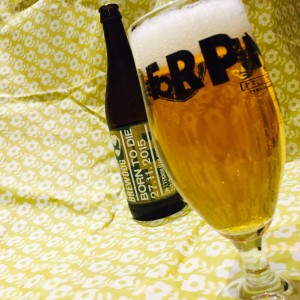 Earlier on today I and every other BrewDog share holder received an email that told us that we could go into our nearest BrewDog bar from midday and if we took a friend we could get a free bottle of beer.
And so after my meetings I grabbed a friend and headed down to my nearest bar only to be asked what sized glass I wanted the beer served in.
I read back over BrewDog’s email and pointed out to the bar staff that nowhere on the message does it state that the beer has to be drunk in the bar and that a 660ml bottle of 8.5% beer was too much for a lunchtime on a work day and therefore I didn’t want it.
There were initially shocked looks at someone saying no to a beer, but the girl behind the bar was lovely and after being told that I wanted to write about the beer and the offer she allowed me to take a bottle, which isn’t a big problem given that BrewDog bars allow off sales.
Anyhow, BrewDog need to be more careful about how they word their offers, because I can’t be the only person to have had this conversation in one of their bars today.
As for the beer, it’s a big fat hop heavy joy of an IPA, packed with fruit salad and herbs, hedgerow, and jelly sweets, while the malting is a gloopy caramel and wafer biscuit, and the smell is a thick resinous redwood nose full of boozy fun.
And with a finish that’s long and bitter and super dry, this is the kind of beer that BrewDog do so well.