Posted on November 6, 2015 by Simon Williams 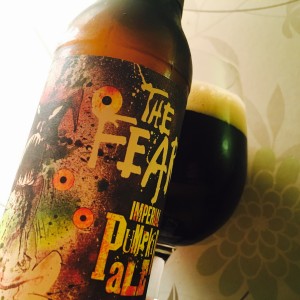 Imperial Pumpkin Ale.
It’s a bit like a big boozy cola.
Or, if you’d like to have a more British take on it, a big boozy Dandelion & Burdock.
None of that is a criticism as I like this a lot.
The Fear is boozy and chewy and gloopy and I would happily drink this regularly instead of a Stout.
The aroma is treacle tart and malt loaf, and the beer sits a deep purple brown in my glass.
The malting is heavy with molasses, vanilla pods, treacle and waffles and there’s a good hedgerow and hazel hop.
And under all this there’s a super rich pumpkin pie, cinnamon and nutmeg thing rumbling away that’s warmed through with rum and whisky heat.
Imperial Pumpkin Ale.
Yum.