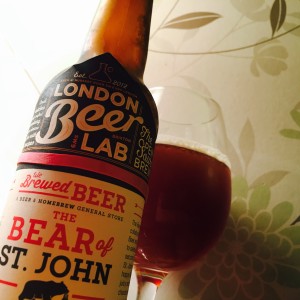 With an aroma full of Passion flowers and peaches, this rich red beer is very good indeed.
There’s a chest warming booziness that’s deep and round but fortunately doesn’t become a burn, instead it boosts everything else going on in here.
And there’s plenty going on.
The body is gloopy toffee malts, all honey glazed brown bread, stewed strawberries, peanut brittle and sponge pudding, and the hops give you lots of hedgerow greenery, pithy hazel leaves, grapefruit zest and lemon rind.
All of this goodness is held together with a gluey pine resin that adds a sweet earthiness to the dry bitter finish.
I also like the idea that the bottle’s label is a postcard of sorts on which you can make notes about the beer and send it back to the brewery as London Beer Lab actively seeks to work with its public to brew its beer.