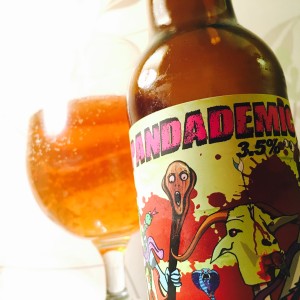 A Pale Ale or Session IPA brewed with Citra and Amarillo, there’s something distinctly unpleasant about this little bottle of beer.
It’s a buttery, slimy, butterscotch sweet thing that simply smells and tastes wrong.
And generally if something smells and tastes wrong then it is wrong, and as Panda Frog Project comes from Mordue Brewery, whose beer I generally like, I’m even more disappointed.
But you can barely taste the malts apart from a watery caramel and the hops do nothing under the weight of this nasty chemically tinged butterscotch that reminds me of nothing other than the last time I was pulled a pint in a pub and the lines hadn’t been cleaned properly.
I poured it down the sink