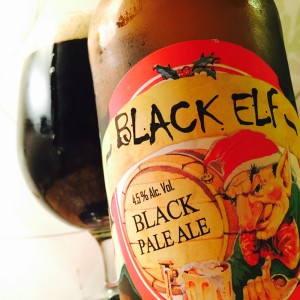 I wasn’t expecting much from this, but I was pleasantly surprised.
Maybe Black Elf isn’t the most exciting beer in the world, but it tastes pretty good and that’s what matters, right?
Kind of a hoppy Mild, Black Elf pours a deep purple brown and smells of treacle, blackberries and brown paper bags.
The malting is chocolate spread on toast, caramel and sea salt, and there’s a decent autumnal red leafy hopping that’s dry and pithy, sharp with hedgerow and sweet with maple syrup.
And that’s about that, but that in itself is really rather enjoyable.