Posted on November 5, 2015 by Simon Williams 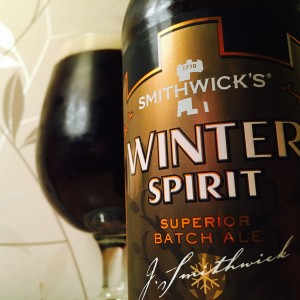 Not bad, if a little uninspiring, Smithwick’s is part of the Diageo Group (Guinness, Harp, Tusker et al) which makes this seem better than it might have otherwise been.
After all, it’s brewed by a great big corporation who don’t really like beer, they like making money.
At least that’s how I see them when looking through a Guinness filter.
But that’s a bit unfair, because this really is alright.
It’s a big malty beer, all round and warm, full of toffee popcorn, digestive biscuits and Maltesers.
Yes, Maltesers.
There’s not much of a hop presence here mind, so you’ll be disappointed if that’s what you’re after.
There’s just the merest lick of hazel leaf hedgerow and the tiniest trace of dandelion and burdock.
But there’s a million times more depth of flavour than other big brewers I could think of (a certain Suffolk based Brewer springs immediately to mind).
Corporate, but not desperate.