Posted on November 7, 2015 by Simon Williams 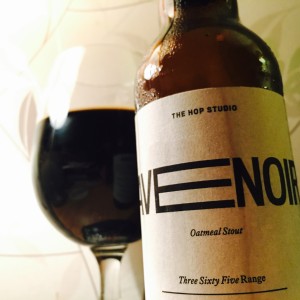 Part of Hop Studio’s Three Sixty Five range of limited edition brews, this Oatmeal Stout is thin and flat and really rather horrid.
There’s an unpleasant near sourness that rubs out anything else that might be going on in here.
The aroma is a damson fruity bitterness and the beer pours an oily black, but when I take a swig I can’t discern anything outside of this nasty, almost chemical thing that wrecks what could have been rather good.
This, after all, is an Oatmeal Stout.
It should be rich and thick, smooth and creamy, full of coffee and aniseed, chocolate and toast.
But it isn’t.
It really isn’t.
This is not nice at all and I poured it down the sink.