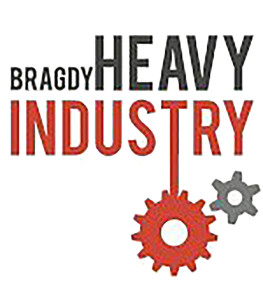 A week or two ago I got hold of a bunch of cans of beer from a Welsh brewery called Heavy Industry that I’d been wanting to try for some time, and as I drank them and realised how much I liked them I felt that getting to know them a bit better would be a good idea, especially when I noticed that one of their musical references was a song by The Prisoners, kings of the Medway Scene and a band that I love.
And so I got hold of Tom and asked a few questions.
This is what happened: 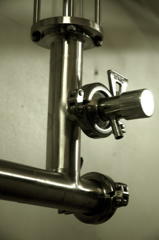 Hello there. Please introduce yourself.
My Name is Tom McNeill, I am the director and head brewer of Heavy Industry.

What brought you into the world of brewing and when and how did you begin?
I was the co-owner of a tour bus company specialising in splitter vans for bands and basically the bottom dropped out of the market.
I had drifted into everything I had done in my life so I decided to get qualified in something and at the time, in 2009, it seemed like a good idea to get into brewing since it was at the time a bit niche and I have always loved beer.
I had homebrewed as a kid when we used yeast harvested from old chimay bottles with kits and shit-loads of priming sugar to make a kind of Belgian electric soup which we were very happy with.
I like that brewing, like most jobs I have had, is practical and that you are in control of almost all of the manufacturing process except for malting and hop growing.
There is a clearly defined beginning and end, and in the end there is beer and that is good. 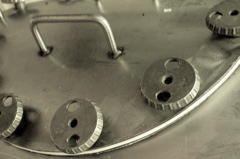 Where are you brewing and what is the current brewery set up?
We are brewing in an old abbatoir in Henllan, Denbighshire, which is on top of a hill with panoramic views and off the beaten track.
Very Texas Chainsaw Massacre.

You mention influential songs on your beer’s labelling, and you are obviously a big music fan. Do you think there is an intrinsic link between music and beer?
I see craft beer as entertainment and so beer and music make excellent bedfellows.
We listen to music all day in the brewery with two iPods on shuffle so we don’t have to listen to moron DJ’s or the news, neither of which are entertaining and are banned.
It is a shame that so many music events are monopolised by mainstream breweries.
The green Man festival in Wales gives micros a good shout though. 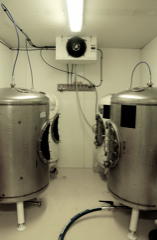 Canning. Tell me more.
We had won a lot of awards for our bottled beers but felt that the filtering process, whilst wasteful of product with losses sometimes of over 10%, was also stripping a lot of flavour from the beer and since we make such efforts to get it in there in the first place we had to find an alternative.
Finding a bottler who would not sterile filter was an uphill struggle and we had to part with our old bottlers.
I had wanted to use cans from the get-go but we couldn’t work with the mobile canners minimums.
Fortunately a local man was thinking of opening a short run cannery and so we went with him.
The losses of product are much reduced and the flavour is now much bigger and fresher, much more in line with our cask and keg products.
Storage is easy and the beer tastes better so it’s win win.
We are certainly not canning just for the sake of it or to be trendy (although obviously we are achingly Hip, man!).

What your plans for the future?
We have borrowed a shedload of money and are currently more than doubling our fermenting and conditioning.
We have added two new staff members and so now there are four of us.
This has lessened the workload and made things a bit more civilised.
We have a new investor and are looking at the possibility of opening some bars in the next couple of years .
We have very deliberately built up a solid portfolio of beers over the last three years which span a lot of styles, and we have learned a lot and been fortunate enough to win some nice awards along the way.
We have a good relationship with some wholesalers who share our values and get our stuff out there and are also swapping with like minded brewers.
Our larger capacity and increased manpower and higher profile will, I hope, enable us to build on the gains we have made and  free us up in the brewery to make some more out to lunch stuff next year.

Achingly hip they may be, but if you can get hold of their beer you’ll be very pleased that you did.
Look: 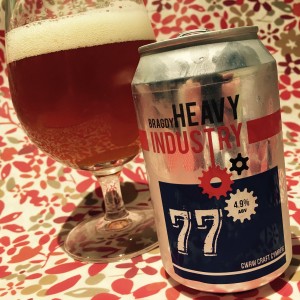 77 (4.9%)
Billed as an Amber IPA, 77 is a decent little beer with a malty body and a fruity hop hit.
Pouring from its can a warm amber, the smell is caramel and jelly sweets, and as you take a swig you find a chewy toffee and brown bread malt, and lots and lots of hops.
It’s a blend of Columbus, Cascade, Mosaic and Simcoe, and between them they provide some of the same jelly sweets as you get from the aroma, along with peach and mango, mandarin, lemon rind and a nice zingy sherbet as you reach the sweet fruit salad finish.
Rather good. 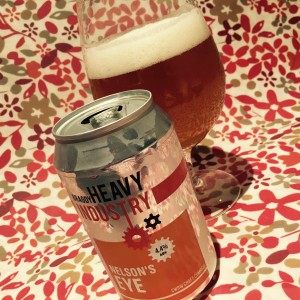 Nelson’s Eye (4.4%)
Nelson’s Eye is a Golden Ale brewed with Nelson Sauvin which adds a very nice pithy gooseberry skin and white grape edge to this sweet round beer.
The aroma is peach, vanilla and a splash of white wine, and the beer sits a bright gold in my glass.
There’s a hay bale and Weetabix, caramel, honey and shortcake malt that creates the backbone of the beer and over it the Nelson Sauvin do their thing, giving you a little gooseberry, a little grape and a white wine bitterness along with lots of melon, lemon and lime leaves.
All this and a finish that’s crisp and bitter.
Very nice indeed. 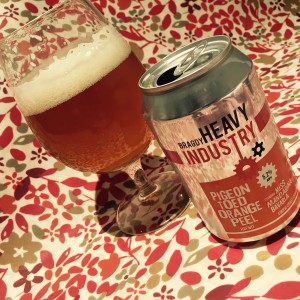 Pigeon Toed Orange Peel Halfwit (5.2%)
This is really rather marvellous.
A cloudy wheat beer brewed with the Mandarina Bavaria hop and named after a Prisoners song, I’d love it simply because the brewery know the Medway Scene, but it just so happens that this is a great little beer.
Pouring a peachy orange, the smell is mandarins and spices.
There’s a good creamy thick malt that’s packed with shortcake and honey, a hint of banana from the yeast, some warm nutmeg and cloves and a load of rather sexy zesty and zingy orange and mandarin, peach, lemon and lime that takes your hand and leads you to the big bitter snog of the finish.
Best drunk while wearing a headcoat. 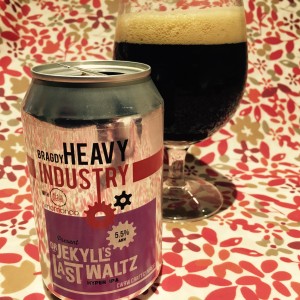 Dr Jekyll’s Last Waltz (5.5%)
Brewed in collaboration with Black Cloak Brewery, this Black IPA includes rather a lot of toasted coconut, and boy does it work.
You find all the things you’d expect from a Cascadian Ale, the rich treacle and roasted nut aroma, the thick cappuccino head on the deep dark purple black beer.
And there’s the rich thick burned toast, espresso, prune and honey of the malts, and the sharp slap to the cheeks of the Cascade, Simcoe, Amarillo and Galaxy hops.
Pine resin and peanuts, green herbal leaves, grapefruit, kiwi and pineapple all vie for attention.
And then there’s this rather lovely soft playful coconut thing that sits right in the background and adds a warm roasty earthy warmth that really does make this beer something else entirely.
Superb. 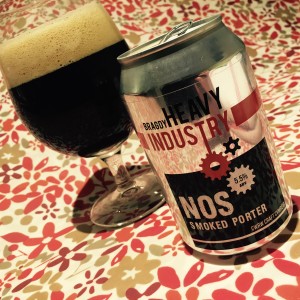 Nos Smoked Porter (5.5%)
It’s a Porter and it’s smoked.
Like a delicious crossbreed of London Porter and Rauchbier, Nos pours an inky black with a creamy head and smells of treacle, maple syrup and corrugated cardboard.
The malts are thick and hefty, all treacle tart, rum and raisin chocolate, burned toast and charcoal, and the hops are brittle and crisp, crunchy autumnal leaf litter, a splash of lemon juice, some grapefruit rind and a dab of marmalade.
And all over this beery goodness there’s a fireside fug of wood smoke and pipe tobacco.
It’s a brandy fuelled late night bone dry bonfire and it rounds off this super liquorice laced beauty.

Thanks to Tom and Max for their time and for their super beer.