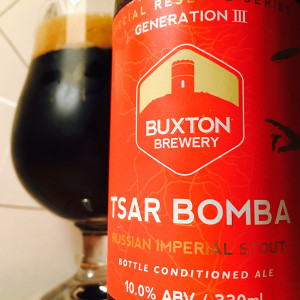 Brewed with harvested yeast, I wanted this beer to be so much better than it is.
That’s not to say it’s bad, because it’s not.
Tsar Bomba is a hefty Imperial Stout with a light fungal sourness from the harvested 1978 yeast and rich with an earthy dampness from the barrel ageing.
There’s chocolate and coffee, burned wholemeal toast, treacle tart and linseed, and a crunchy leafy hop thing that adds a nettle tea bitterness to the finish.
But there are several Imperial Stouts from Buxton that are far far better than this, especially at the price.
In fact, at the price, this is a bit of a disappointment.