Posted on December 7, 2015 by Simon Williams 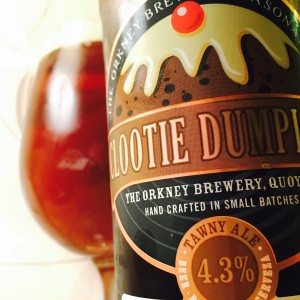 In trying to create the beer equivalent of the Scottish Clootie Dumpling, a spiced pudding wrapped in cloth, Orkney have made my favourite of their beers.
Pouring a rich Amber, the smell is rum and raisin, cinnamon and cloves.
There’s a rich round malt that’s full of toffee and digestive biscuits and a little rum and raisin chocolate.
You’ll find a gentle hopping too, with hazel and nettle tea adding a good sharp edge to the cinnamon and nutmeg fuelled finish.