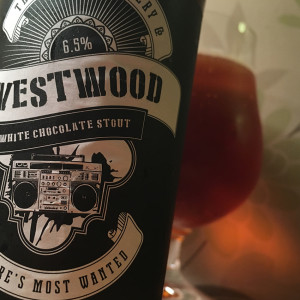 I’m guessing that this beer is named in honour of Tim Westwood, he of big beats, remixes and the pimping of people’s rides, and if I’d read the label it probably would have told me.
Westwood is a beer originally brewed in collaboration with BrewDog Leeds and, what’s more, it’s a White Chocolate Stout.
A few years ago Durham Brewery brewed a White Stout that was amazing, and this isn’t too far behind.
This is a pale beer brewed with lactose and cacao which means everything feels silky smooth and tastes rich in vanilla and chocolate.
The smell is boozy Kinder eggs and the beer pours a rich Amber.
The malting is Caramacs and shortcake and there’s a herbal tinged woody hedgerow hop thing going on.
As the latest Star Wars movie is out I’ll put it in Yoda’s terms, “very good this is and try it you must.”