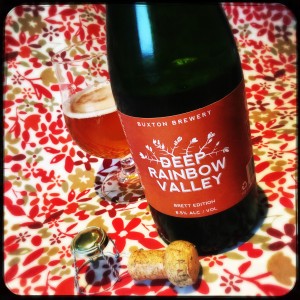 This bretted edition of Buxton’s 2015 Rainbow Project beer has been infused with orange juice, gorse flowers and Amarillo hops, and it is absolutely delightful.
Deep and multi layered and interesting and still easy to drink, Buxton have created something rather special.
The beer pours a golden orange and smells of heather honey and hillsides in the rain, a background prickle of earthy herbs follows you from the initial smell into the first mouthful, adding a green woodiness to the sharp orange juice that sloshes around over the soft honey and waffles of the malts.
The Amarillo add their own spiky hit of lemon rind and pine needles and there’s a beautiful pithy floral thing from the gorse flowers that brightens the edges of the super dry, sour finish.