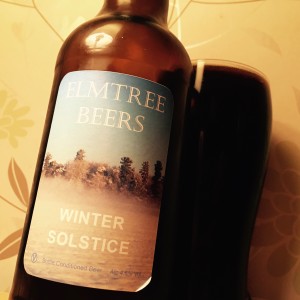 OK, it’s no longer the Winter Solstice, I’m late to the party.
And I admit it, I wasn’t even invited to a party.
So I sit here alone with this rather fine little Porter and I’m happy.
Winter Solstice is a deep mahogany beer brewed with vanilla pods and cinnamon that has been conditioned in its bottle for at least two months before being released into the world.
The result is a Porter that smells of vanilla ice cream and plums.
The malts are cola, digestive biscuits, chocolate and a hint of coffee, and the hops are sharp hedgerow and nettle tea with a splash of lemon juice.
The cinnamon adds a lovely warm earthiness to the background of the beer and the vanilla makes the finish round a soft and voluptuous.
Happy Solstice.