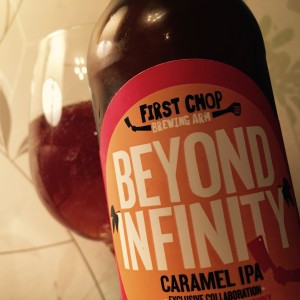 A collaboration between First Chop and Flavourly, this is pretty awful actually.
I’ve been a fan of First Chop in the past, but this has the background hum of a beer that’s been heavily processed during bottling, and by that I mean filtered to the point of no return and with the whiff of cleaning fluid.
It feels thin and oily and smells of a watery caramel.
Mind you it is billed as a Caramel IPA, so the smell is about right.
The malts are a bland and one dimensional toffee and biscuit thing and the hops have a morning after tobacco in an ashtray tinge to their tired herbal leaves.
I hope First Chop work on their bottling if they’ve decided to start filtering instead of bottle conditioning.
Limp.