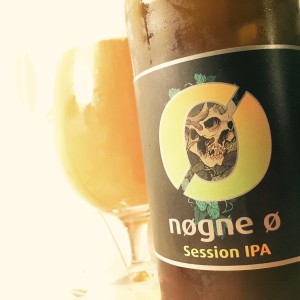 So Nøgne took the corporate dollar and shortly after their Head Brewer had made a point of saying that nothing would change, he left.
The death of “Craft” beer?
It depends what you want “Craft” beer to be.
I, like many others, was angered (though not at all surprised) by Camden Town Brewery selling to a multi-national, and Meantime had always wanted to be as big as possible in my opinion.
But I was particularly shocked by Nøgne Ø selling to a large corporation, and yet I know I shouldn’t have been.
It’s all business.
The thing is, if Nøgne’s Head Brewer really thought nothing would change then he was very naive.
That said, this Session IPA is really rather good.
Pouring a pale gold with a resinous fresh fruit salad smell, there’s a good caramel and bran flake malt and a load of hops that are full of citrus zestiness, green herbal leaves and a good helping of resinous pine.
This is a very nice beer indeed, and if Nøgne Ø continue to make beer like this, and the fact that their distribution is better and therefore the prices come down a little, then I don’t have too much of a problem because if the aim of “Craft” beer is to get more and more people drinking better beer than the flavoured water that hogs the shelves of our supermarkets, then this is a good way to do it.
Of course, there is always the danger that eventually market forces will bring quality crashing down, but I’d argue that that is already the case with BrewDog’s Punk IPA.
Oh yes, they shout about their independence, and I largely agree with them on many of their points regarding AB/InBev, however they have handily forgotten how the changing of the recipe for Punk IPA and the lowering of its ABV seemed to coincide all too comfortably with it finding its way into every shop on every street in every town in the UK and abroad.
Reducing costs to make production more viable?
Could be.
And before all the trolls come out of their dark little holes, I’m simply thinking out loud here.
For what it’s worth, I’m thinking out loud while drinking a rather nice little Session IPA from a brewery that has recently “sold its soul” to the corporate devil.