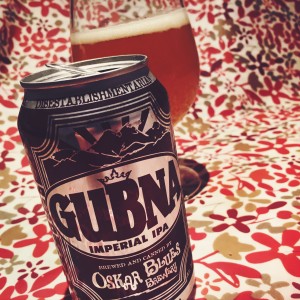 Do you remember pineapple chunks?
Those hard as all hell cubes of pineappley deliciousness you used to eat at junior school?
That’s what this beer smells of.
That and booze.
Gubna is like eating pineapple chunks while sitting in the fug of your favourite drunken uncle as he tells you stories that sound magical and otherworldly, but are mainly about being drunk.
Which is what you’ll be by the end of this enormous American Imperial IPA.
The body of the beer is a fat round chunky toffee coated pretzel, honey and a pinch of sea salt, and the hops are thick and gloopy with pine resin, sharp with lime zest, peach juice and more and more of the pineapple that makes the finish of this beer bitter, sweet and sticky.