Posted on February 9, 2016 by Simon Williams 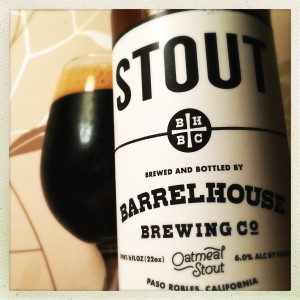 After the other beer I have tried by Barrelhouse I wanted this Oatmeal Stout to be so much better than it is.
Don’t get me wrong, it’s not bad, it’s just missing something.
It’s a little bit thin.
There’s a nice coffee and stewed plum aroma and the beer pours a deep purple brown.
Taking a swig you’ll find a bunch of herbal hops, crunchy autumnal leaf litter, hazel, lemon rind and maple syrup, along with some black coffee, burned toast and honey from the malts.
The problem is that this, especially as an Oatmeal Stout, ought to be thick and chewy and satisfying, but instead it feels a bit thin and flimsy.
Not bad, just not great.