Posted on February 8, 2016 by Simon Williams 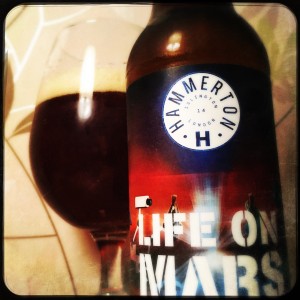 Hammerton’s Red Ale has been in my fridge for some time as it arrived just before David Bowie passed away and so, even though it’s a silly notion, I couldn’t bring myself to open it.
And now that I have I’m glad that I waited a little while, as I’d have probably written some over emotional article that barely touched on the beer.
And that would have been unfair as this is a very good little bottle of beer indeed.
Conker red and with a toffee, peach and sweet chestnut smell, the beer begins all chewy and round, the malts giving you a very satisfying caramel shortcake body, and then the hops pop up with lots of herbal greenery, hazel and blackberry leaf tea, a touch of tangerine and some zesty lemon rind.
This is a very nice beer and I don’t want David Bowie to be gone.
It hurts almost as much as losing John Peel did.