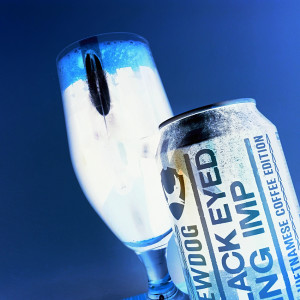 This is an effing enormous coffee and vanilla Imperial Stout, a Stout that’ll get you very drunk indeed but refuse to let you go to sleep when you’ve had enough.
It’s an evil Stout, a Stout that only wants bad things for you.
But they’re bad things that you want to have even though you know they’ll do you harm.
Which is why I knew, at nine o’clock when I opened the can that this was a bad idea.
But I couldn’t help myself.
And I’m so glad that I did, though I know I’ll regret it in about thirty minutes when I’m totally pissed and, to coin Mark E Smith, totally wired.
Pouring an inky black, the beer stinks of rum and raisin, dark chocolate and sex.
The malts are ultra heavy, sitting on your chest and not allowing you to breath as they pummel you with treacle and burned toast.
There are some hops, though they struggle under the weight of the malts with their hazel and hedgerow, lemon sherbet and orange marmalade kisses.
But it doesn’t really matter as the brandy heat of the booze wraps itself around you and makes you feel squidgy and soft, ready to be done over as you head toward the vanilla rich, molasses sweet finish.
Help.