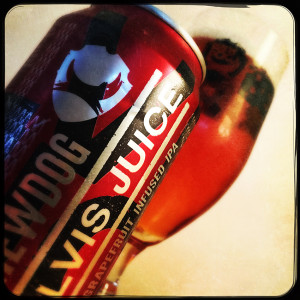 I wanted this to be so much better than it is.
It’s a shame, but unfortunately Elvis Juice has to be reviewed in the context of Magic Rock’s unbelievably brilliant High Wire Grapefruit.
And it doesn’t come close.
It’s still an alright beer, with its grapefruit and Passion flower smell and its warm gold colour.
There’s a decent if rather floral hoppy hit, some lemon and lime cordial, basil and green tea, and a soft caramel wafer malt, but the grapefruit just doesn’t have the life, the zing, the joy of Magic Rock’s beer.
In fact, even though I know better, it all tastes rather fake, rather like a grapefruit flavouring.
Hey ho, you can’t win them all.