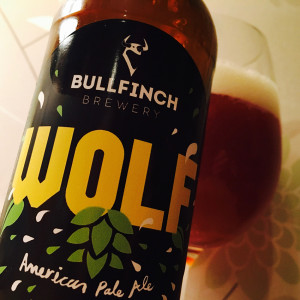 Wolf is an American Pale Ale.
Wolf is a deep Amber with a nice fluffy head.
Wolf smells like a packet of Starburst, which is a good thing.
Wolf has malts that are thick and chewy and packed with toffee and waffles, honey and biscuits.
Wolf slaps you about with all sorts of hoppy goodness, from pithy lemon rind to zingy lime zest, mango, satsumas and kiwi.
Wolf is a Pale Ale that many breweries would happily call their IPA with its long bitter and superbly dry finish.
Wolf is very good.
I have no idea why it’s called Wolf.