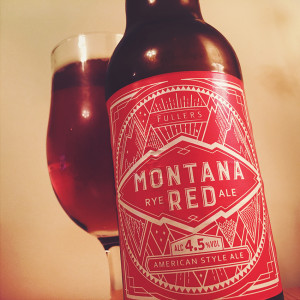 In general I like Fullers beer, in fact they’re just about my favourite of the big breweries in the UK.
But Montana Red, their Rye Red Ale, is really lacking.
It pours a nice enough cherry red, but the smell is a watery biscuit and red fruit thing.
The malting has some nice toffee and brown bread, but there’s nowhere near enough of the earthy spiciness, the meaty pumpernickel I’d expect from this style of rye beer, and the hops attempt to slap you, but their lemony zing and herbal greenery falls away too quickly, leaving you with a finish that’s far too light.
All that said, I will definitely drink this again.
I know, weird right?
But no, not really, a bit bland it might be, but in comparison to most everything else on the supermarket shelves at least Montana Red tries to do something different.
And for that reason alone, Fullers remain just about my favourite of the big breweries in the UK.