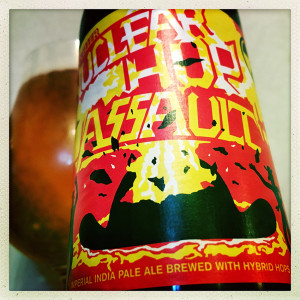 Maybe I was hoping for too much.
Maybe I just wanted this to live up to its name.
Maybe that is too much to ask for.
Don’t get me wrong, this is a good IPA, but it’s nowhere near as good as it could have been, it’s not even as good as Green Gold.
Nuclear Hop Assault has been brewed with “hybrid hops,” though it doesn’t tell you anywhere on the bottle exactly what they are.
The beer pours a nice bright gold with a little fluffy cloud for a head and has a peculiarly English hop aroma, with a slightly spicy hedgerow herbal thing tinged with tangerines.
There’s a a sweet and biscuity malt, some honey and waffles, and there’s the hybrid hops that seem to mix satsuma and lemon rind with tamarind, tobacco and a hint of aniseed.
This isn’t quite Fuggles, but there’s more than a hint of them in here.
The finish is long and dry and bitter, and the beer balances its various parts very well, underpinned as it is by a rich alcohol warmth.
And so maybe it’s just me, and maybe I was expecting far too much, but I just feel like there should be something more, when actually there’s just a decent Double IPA with some hops that are vaguely traditional and English in their flavour.