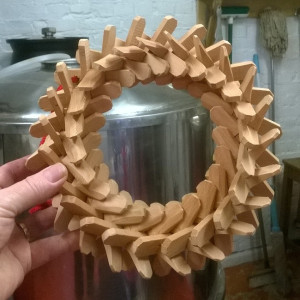 Those who know me well will know that I am fascinated by Norway.
I love the country and the people and have even learned the language.
And so I was incredibly interested in Poppyland’s Martin Warren and his tales of travelling through Norway and drinking traditionally home brewed beer in Voss.
Kveik is a traditional Norwegian yeast strain which is being kept alive by a few brewers in Norway.
Martin got hold of some during his travels and being the man that he is, he also set about making his very own Kreikstokk, a wooden frame on which the yeast grows.
These frames are little works of art, Martin’s being a complicated hoop of wooden pieces, a three dimensional jigsaw on which the yeast lives.
He was just putting all the bits together when I visited him last October, and since then he has begun the process of cultivating yeast with it. 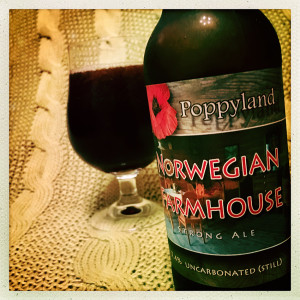 He has also used the sample he returned home from Voss with to brew his first Norwegian style Farmhouse beer.
And what a beautiful beer it is.
Brewed to be still (flat), it initially takes some getting your head around the fact that there’s no fizz, but once you do you’re in for an absolute treat.
The beer is a deep mahogany brown and smells of treacle tart and plums.
There’s a big chewy malt that’s heavy with figs and honey, molasses and dates, and this is prickled by a sharp green nettle and hazel hopping that adds a super zing to the edges of the beer.
And all around you there’s a lightly woody yeast spiciness, it’s warm and earthy and it’s shot through with the sticky sweetness of the Serbian Spruce that’s been added to the mix, leaving you with a finish that’s round and sticky and incredibly satisfying.