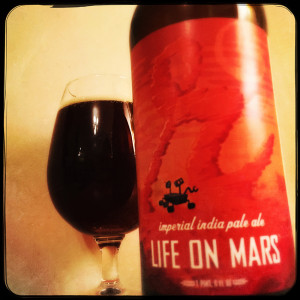 Reuben’s Imperial IPA, for that is what this is, is such a deep red that I’d be surprised if it doesn’t have rye in it.
And there’s a bit of a meaty toffee backbone too, that suggests the addition of rye to the beer.
So we know what it looks like and where the flavour begins, but what else is there?
Well now, there’s a vanilla fudge and peach aroma and when you take a swig, along with the aforementioned rye toffee goodness, you’ll find more vanilla, Toblerone, honey biscuits and a pinch of sea salt while the hops give you rich tangerines and guava, redwood resin, lime leaves and grapefruit all wrapped up in a fizzy sherbet jacket.
And with its long bitter chewy finish, this is a very good Imperial IPA indeed.