I have avoided doing t 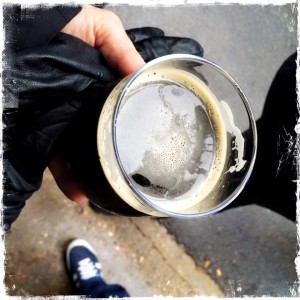 he Bermondsey mile up until now as it seems to be akin to a rite of passage in the same way a stag trip to Prague once was thanks to it’s popularity and all the packaged beer crawls on offer. So what exactly is it?

It’s a (1.5m) jaunt around South East London along the train line to a number of breweries and bottle shops that have set up home in the once disused railway arches scattered around Bermondsey. There are now five breweries (It was six but Kernel are now sadly missing) and two bottle shops on the route. It’s happens on Saturdays only* and most of the venues on route are open between 11am and 5pm although some open a bit longer to 6 and 7pm.

Our intrepid band met up at London Bridge and made our way to the first port of call which was The Southwark Brewery Co. It was a brewery whose beers I had yet to sample. It was only midday and the place was getting crowded already so I grabbed a pint of Ella (5%) which was a golden, hoppy and bitter pint with some pepper and went down a treat. It was almost a cask drawn lager. It was a good start to the day and the staff were very friendly. Given we were running late there was no chance to sample another beer in their range and we headed off practically next door to Anspach & Hobday in the afternoon rain. 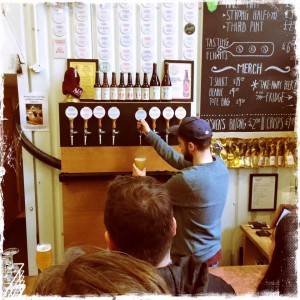 I was wary of this lot not having enjoyed their beers so far albeit those being out of a bottle. However today I had what can be described as a beer version of a religious conversion based on a wonderful pint of New World Goze (4.7%). It’s a lovely golden sour pint with an after taste of salt and lemon. All what was missing was the tequila and given that other beers I sampled included Sea Salt and Chilli Stout and a light coloured White Coffee Milk Stout I would not put that past them! Are Anspach & Hobday trying to hard? Are they being too clever? Who gives a flying fig when their beer tasted as good as it did today and I hope they push the boundaries even further.

Moving on past The Bottle Shop we made our way a bit further to Brew By Numbers which was rammed to the rafters with large queues forming we reluctantly headed off on the longest part of the walk to one of my favourites, Partizan Brewing. 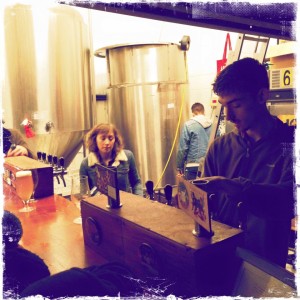 I really like this brewery. From their saisons to the works of art that adorn their bottles I just cannot fault them.Today my vow to give my beloved saisons a miss lasted all of about two seconds as I clocked a version brewed with Mandarina Bavaria (3.8%) which was delicious and packed full of orange peel.

I did however give the alcoholic ribena a miss (raspberry & lemon saison) sampling a pale ale packed full of tropical fruits thanks to it’s Nelson Sauvin (4.5%) hops. The brewery was getting pretty packed and people were being turned away. I thought the staff were pretty cool in the way they dealt with a large number of thirsty visitors and that reflected pretty well on them I thought. Giving others a chance we headed off to our next stop in the shape of the taproom belonging to online beer seller Eebria which thankfully, as the rain was getting a tad heavier, was practically next door. 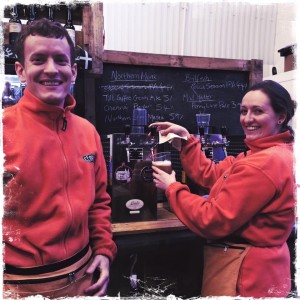 I was not sure what this place would bring but those fears were unfounded as it was a friendly place selling a number on beers on keg alongside a vast selection of bottled beers.

I had a Bullfinch Rascal session IPA (4.4%) which was a tad disappointing after the beers next door. As Kernel was out of bounds I also sampled their Dry Stout Mosaic (4.4%) but the mix of licorice, roast coffee and tropical fruits did not sit well with me but thankfully the old style bar games more than made up for it!

As it was no 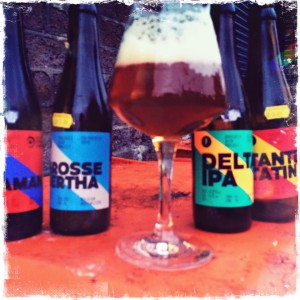 w around 4.30pm we decided to give Fourpure a miss and headed back to try our luck at Brew By Numbers. Fat chance as it was packed more so than before so we headed back to near the start of the mile to try The Bottle Shop. Split across a downstairs bar selling bottles and an upstairs bar selling keg I chanced my arm downstairs with some beers from The Brussels Beer Project.

Their Delta IPA blew me away when I had it last year and I have been waiting to try some more of their range. I was not disappointed as the TanteTartin (11.2%) was my beer of the day and has to be tasted to be believed. It’s a sweet beer flavoured with apples and honey but, being so light with it to, you would have been forgiven for forgetting you were drinking a strong, quadruple beer. Wonderful.

Our last port of call was a pub in the shape of Simon The Tanner. It’s a pub I have wanted to visit for a while now especially as it is run by the same people who run Mother Kelly’s and 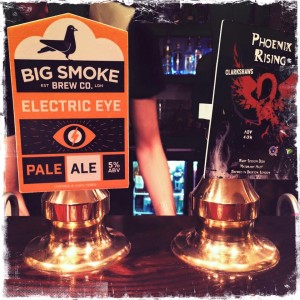 It’s a small pub which somehow managed to cope with the influx of numbers our group bought  in and we enjoyed well kept beers in the shape of Surbiton’s Big Smoke Brew Co’s Electric Eye (5%) and Brixton brewer Clarkshaw’s Phoenix Rising (4%).

The former was a sweetish, orange tinged hoppy pale ale with hints of tropical fruit whilst the latter was a ruby ale with some chocolate and spice but sadly did not excite my taste buds at all. It’s the 2nd beer I have had from Clarkshaws and it’s also the 2nd disappointing one I have had. I guess they are just not for me.

And that was it. A very enjoyable day with good company and it was really fun to meet like minded people throughout the day on route. Not sure I would repeat the crawl again and would I concentrate on one or two breweries at a time as an alternative starting with Brew By Numbers (if I can get in!) and Fourpure.   And please breweries let’s have some more toilets!!!

* Note that some of the breweries are now open on Fridays including Brew By Numbers and Anspach & Hobday. Check the brewery websites for more info.

2 Responses to The Bermondsey Mile