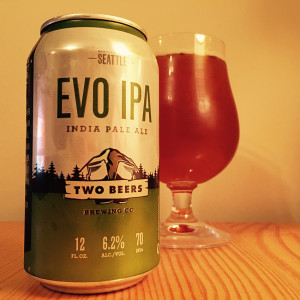 Slinking out of its can a warm amber, this little IPA from Seattle’s Two Beers Brewing Company smells of pineapples and woodwork classes.
There’s a very good sticky toffee pudding malt, edged with breadcrumbs and honey glazed shortcake biscuits, it’s round and warm and satisfying, and all over it the hops – Simcoe, Amarillo and Centennial followed by a dry hopping of Simcoe and Columbus – shout and sing.
You find rich brown rolling tobacco, redwood resin, peaches and grapefruit zest, passion fruit and leafy herbs which all make for a super crisp bitter finish.
The only thing that lets it down, in my opinion, is that it’s a little bit flat, I’d like more fizz, but it’s pretty good nonetheless.