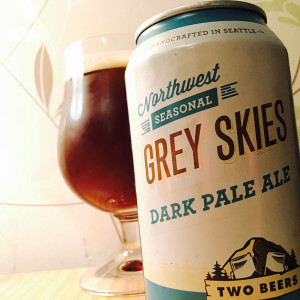 Another lovely little beer from this Seattle based brewery, Grey Skies is a Dark Pale Ale which sounds a bit silly, though not quite as silly as Black IPA used to sound before we got used to it.
This is one of the brewery’s seasonal beers and it’s deep and dark and rich and round, pouring a heavy mahogany colour and smelling of prunes and biscuits.
Grey Skies is a malt heavy beer full of treacle tart and figs, dates and damsons, honey, brown bread and a load of roasted nuts.
You do get some hops too, they’re sharp and tangy, orange rind, mango and lime leaves that makes for a good and much needed bitter hit that cuts across the sticky toffee finish.
Yet again with this brewery, I’d like a little more fizz, though it doesn’t stop me enjoying myself.