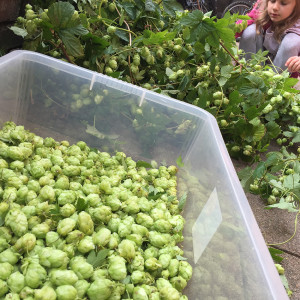 Harvesting hops with my daughter.

A few years ago I was sent some hop seeds from Meantime Brewing and I planted them.
In the first couple of years they didn’t do much more than grow lots of leaves and look pretty, but in the last two years they started producing cones.
The first year’s harvest went into a freezer but ended up not being used, but last year’s were collected by my local friendly brewing circle the day that I and my daughter harvested them – we did it all by hand and it took a few hours – and were used shortly afterwards.
The hops appear to be Fuggles, they’re definitely a very English hop variety, and I feel immensely proud that not only did they make it into a beer, but they’ve made for a very drinkable little Pale Ale. 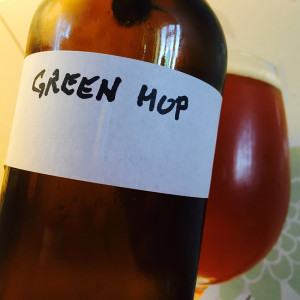 But then BAD are good at brewing.
The beer pours a bright gold and smells of Iced Gems and hazel, warm and inviting and laced with vanilla.
Taking a swig you find a soft honey and shortcake malt, some white pepper and a dab of toffee, and then a round liquorice earthiness and sharp green nettle sting from the hops.
More importantly, from my hops.
I only wish you could all taste it.