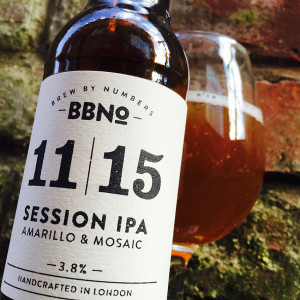 I may have said this before, but I’m getting really bored of Session IPAs, and for no other reason than SIPAs, I shall call them for brevity, appear to be the new fad in brewing and as a result I’m getting too many of them.
Every other beer seems to be a SIPA, loaded with hops up front but weak in the back end, if you know what I mean.
One step up from Table Beer, and it’s probably just my latent alcoholism, but I want something with a bit more body.
That said, Brew By Numbers’ latest SIPA, with Amarillo and Mosaic does smell rather good as I pour it into my glass.
The aroma is fruity and bright, and there’s a load of that kind of thing going on in the flavours too, from grape skins to passion fruit, mango to lime zest, along with a dry woody tobacco and some nettle tea.
But the malt that begins in a perfectly reasonable manner drops off far too quickly, as is the case with so many SIPAs.
Mind you, if I was sitting in a pub, a few friends around me, this would be one hell of a beer to glug an evening away with, and I suppose that’s what the SIPA is for.
It’s just when it’s presented in a bottle or can and I’m sitting at home with all my focus on what the beer in front of me is going to give me, the answer is all too frequently, if it’s a SIPA then it’s not giving me enough.