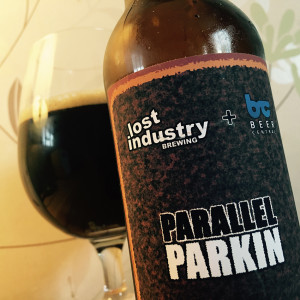 Over on Facebook I have been running a series of posts entitled, “I Have Marvellous Friends”.
It’s a place where I can tell people how super I think that they are.
It’s up to part forty nine at present.
After all, Facebook is for the aggrandisement of one’s self and one’s friends, isn’t it?
And Jimmy, who is now the owner and brewer at Lost Industry definitely deserves to have one of those posts dedicated to him.
We met through CAMRGB when he was a home brewer who sent me his beer to try.
It was always very good, and I was flattered when he asked if I’d design a couple of labels for him.
We briefly caught up in Sheffield during the last CAMRGB event there, and over pizza he told me how he was going to move from amateur brewer to professional, and this made me very excited.
And so Lost Industry was born.
This beer, brewed in collaboration with Beer Central, is an Imperial Brown Ale brewed with all the ingredients that you’d find in a Yorkshire Parkin – a Parkin being a rich and chewy ginger cake baked with oatmeal and black treacle – and it’s an absolute delight.
It pours a deep mahogany brown and smells of spicy peaches and coffee.
The malting is rich and round, thick and gloopy, full of burned toast and roasted nuts, and the hops are a sharp garden border nettle sting that cut across all the gooey goodness of the treacle and the snap of the ginger that builds on your tongue as you head for the big boozy finish.
Jimmy, you are marvellous.