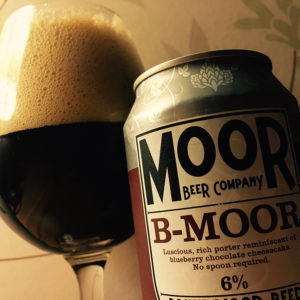 As much as I like Moor’s beer, this is my second can of B-Moor that’s been so feisty that it’s lept from its can and been more head than beer, just a big glass of froth.
The result is a beer that’s hard to smell, a beer that feels very gassy.
Sure there’s a decent dark chocolate, treacle and digestive biscuit malt, and there’s some good herbal greenery from the hops, but the beer feels far too gassy for a Porter, leaving you with a finish that’s airy and, frankly, a bit thin and yeasty instead of rich and round and warm.
B-Moor needs to try harder.