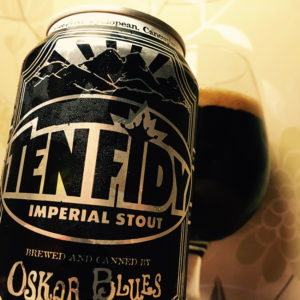 Oskar Blues’ Imperial Stout is really rather good.
Did I say rather good?
I meant bloody brilliant.
It pours as black as pitch with a thick cappuccino head and stinks of putty and prunes, coffee and treacle.
There’s a slightly damp fungal fug in the background of Ten Fidy, the kind of thing you usually find from a barrel aged Stout, and it’s lovely.
This is a big and boozy, malt heavy beer, and that is just how it should be.
You find black treacle, pecan pie, burned wholemeal toast and sticky porridge oats along with the much needed hit of sharp bitter hedgerow hops that brighten the beer, bringing a freshness that you’ll be very thankful for.
But this isn’t enough to detract from the heft of the Jamaica rum booziness of this monster Stout.
It’s a beer that glues itself to the inside of your face and refuses to let go.
But you won’t want it to.
You’ll want to sink into it and lose your senses in its deep dark boozy goodness.