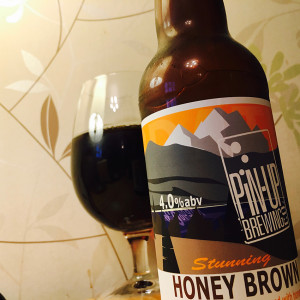 This isn’t too shabby.
In fact it’s rather nice.
Honey Brown is, unsurprisingly given its name, a Brown Ale with added honey.
It pours a chestnut red and smells of pecan pie, and taking a swig you find lots of roast nuts, some toffee, molasses and brown bread toast.
There’s even a subtle smokiness at the edges that adds an extra depth to the green hedgerow hops.
They’re all herbal and sharp with nettles and a twist of lemon.
And throughout all this the honey hums away adding an extra layer of rich round sweetness.
Yes, Honey Brown is rather good.