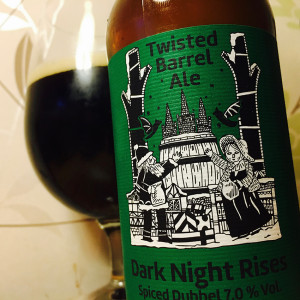 This is a super little beer.
A Belgian style Dubbel with added rye (to make me swoon) and Allspice, the beer pours a deep red brown and smells of spicy cinnamon biscuits.
There’s a load of cinnamon buns in the flavour too, warm and doughy and incredibly inviting, it’s rounded out by with treacle and pecan pie and the lovely earthiness you get from the addition of rye.
The hops are there to provide a crisp herbal aside, some hedgerow and some basil, some lemon zest and some aniseed, they stop the beer becoming overbearingly sweet.
As you drink, the Allspice slowly builds until it prickles on your tongue with bright metallic Angelica and a good hit of star anise, and all of this comes together in a rich and sticky finish with a sharp sherbet fizz at its edges.