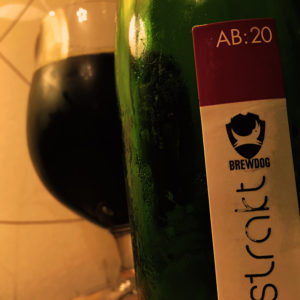 A week or two ago I saw someone in BrewDog buying bottles of Abstrakt for their collection, and when I asked them about the bottles they said they were simply collecting them and had no intention of drinking any of them.
I find that ridiculous.
This is beer.
Beer is meant to be drunk and enjoyed.
And OK, maybe you’ll buy a couple of bottles of the same beer so that you can try one now and then try it in the future.
I get that, though I don’t do it myself, mainly due to lack of both money and space.
But to buy bottles of beer simply to have a full set is just nonsense.
Especially when the beer in question is as drinkable as this is.
AB:20 is BrewDog’s attempt at making a Stout that tastes like Tiramisu.
It doesn’t.
But it’s still damned good.
Pouring a deep ruby red, the smell is Black Forest gateaux and brandy, boozy and fruity and rich.
The malts give you a thick treacle tart, bran flake and honey on toast body, and the hops add a lightly bitter herbal greenery.
Over this there’s a creamy vanilla pod and espresso blanket that’s warmed through by a boozy hot water bottle that’s so comfortable you’ll find yourself drifting off into the fug of late night reverie.
AB:20 is superb.
AB:20 should be opened and enjoyed and then remembered in hushed tones rather than be sat on a shelf and looked at.