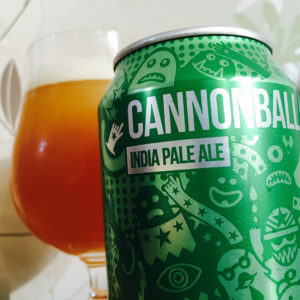 Magic Rock, as many of you know already, won the first ever CAMRGB Beer Of The Year with Cannonball (7.4%), a beer so good it can make grown men weep.
Or at least make them giddy.
Though, to be honest, that might be the alcohol.
Cannonball in a can is everything you could hope, with all those big fresh fruity flavours tasting extra fresh as they leap from their metal jacket.
Human Cannonball (92%), Magic Rock’s Double IPA, pours a bit soupy from its can – at least mine did – but I have no problem with that.
Especially when the beer is so bloody good.
You see, if you’ve not tried it, you need to know that Human Cannonball wipes the floor with almost every other DIPA, and again the canning brings out the best in the beer. 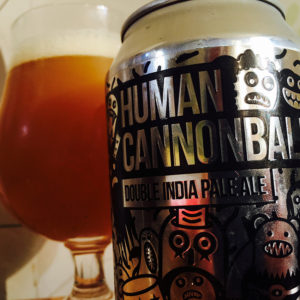 The smell is a thick potent fog of boozy fruit salad chewy sweets and Passion flowers, the malting is big and chewy and gloriously gluey with toffee and biscuits, salted peanut brittle and honey, and the hops, oh the hops, they’re the sliciest, diciest, fresh herbal leaves, mango and melon, lemon and lime zest, sherbet fountains and sexiness.
And all this is held together by a deep boozy warmth as you head for the super bitter finish.
Then there’s Un-Human Cannonball (11%), Magic Rock’s yearly love song to the sublime and the ridiculous.
I missed out on the 2015 version after loving the 2014 bottle, but this year’s version is gloriously silly, stupidly good. 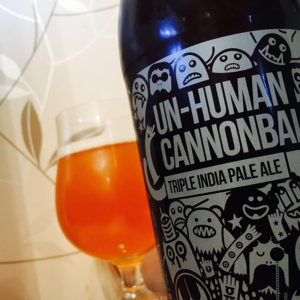 Imagine tangerine marmalade.
Got it?
Good.
Now imagine that tangerine marmalade smeared onto warm vanilla pancakes with crumbly toffee brittle sprinkled over it.
Now you have that image, imagine that while you are taking in the round sweet fruitiness you are being whipped with razor sharp switches of basil and tarragon, needle sharp slices of lime scoring themselves all over your face.
And there’s soft fleshy mango to sponge you down, but all of this is egged on by a fiercely handsome booziness that bears its chest at you, making you giddy with a wink that says, “go on, pour the rest.”
Un-Human Cannonball is perfectly stupid and almost stupidly perfect.