Duvel’s Tripel Hop Beer: You Be The Judge 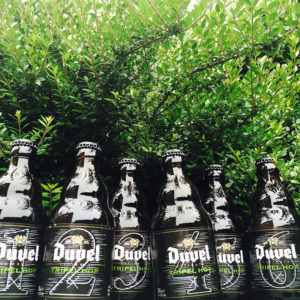 Over the last six years Duvel have been brewing an annual version of their Golden Ale with a third hop, and each year just about every beer drinker I know has been looking forward to them.
On the whole they’ve been pretty good, and this year Duvel has re-brewed the first six and packaged them to look like a blind taste test.
They say that they want everyone to vote for their favourite of the range and that the winner will go into regular production from 2017.
It’s a super little bit of marketing, and it’s a rather nice idea, bringing a fresh and modern twist to what is a stone classic.
I was sent a pack to write about and decided that I could only do this in the company of my old mate Chris as he is a complete Duvel geek, and so he came over armed with the correct glassware for the event and I provided bread and cheese, meat and olives and we worked our way through the Duvel range in the early evening sun. 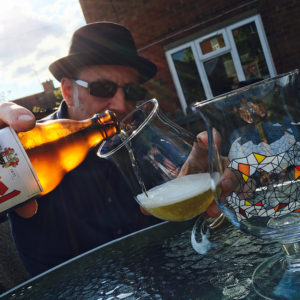 We began with a standard Duvel in order to give ourselves a base to start from and then moved on to the first of the triple hopped beers.
Originally brewed in 2011, the Amarillo hops leaped from the glass, sharp and crisp and lightly woody, and immediately became my favourite Duvel.
Next up was 2012’s Citra version of the beer, and I found the hops far too overbearing.
Citra can become a little too much like washing up liquid, and that’s what I found to be the case in the version of Duvel’s beer.
The first sip was alright, but the hops built into an overbearing monster and I was more than happy to move on to the 2013 Sorachi Ace version.
Maybe it was coming off the back of the Citra or maybe Duvel simply used the hops in a far more subtle way, but this bottle of beer tasted very similar to the original Duvel, with the Sorachi Ace giving a very subtle hint of lemongrass to the edges of the beer. 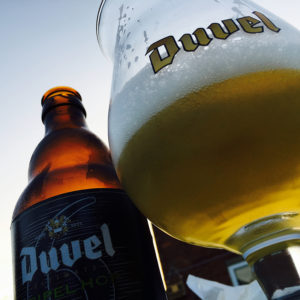 By now we were halfway through the food and the sun was just starting to disappear over the back fence, a slight chill nipped at us and I popped on a cardigan.
Yes, a cardigan.
I’ve been wearing them since I was an Indie kid in the mid eighties when cardigans were de rigueur, and I’m not about to stop now.
Anyway, where was I?
Ah yes, the next triple hop was 2014’s Mosaic, which was round and juicy and full of fresh fruit flavours, quickly becoming a running partner with the Amarillo for my favourite of the range.
Equinox is the hop used in the 2015 version and had Chris and I saying the word in a cod robotic voice a la Channel 4’s long running documentary program.
The hops gave the beer a slightly grassy lemon and grapefruit tinge and was, after Citra, my least favourite of the range. 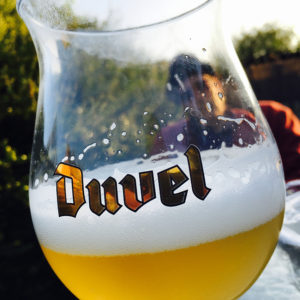 Finally we moved on to this year’s version which has been brewed with the experimental hop, HBC291 and which was, when I first tried it a few weeks ago, my favourite of all the Duvel Triple Hop series.
But that was because Amarillo was the only one that I’d never had.
And Amarillo was the winner for me.
Yes, I really liked the HBC291, with its delicate flower border aroma and its papaya and grapefruit, lime zest and mango, but the Amarillo has a really well rounded flavour, and feels more classy in a way, its flavour more balanced with the core beer than some of the other hops.
So Amarillo gets my vote, though it was a close run thing.
I’m pretty sure Chris agreed, though after all that Duvel the tail end of our evening is now a bit sketchy.