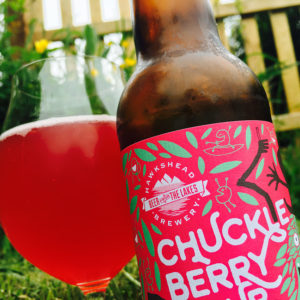 A Chuckleberry is a cross between a Gooseberry, a Redcurrant and a Jostaberry and in this little light weight Berliner Weisse it works delightfully.
Pouring a rich rose pink, the smell is Redcurrant jam and lemon juice.
The body of the beer is a super soft and subtle runny honey and shortcake, and there’s a steely herbal tang and a hit of sharp lemon zest from the hops.
But the Chuckleberries are the stars here, with their plump, juicy and ever so fresh tart flavour.
There’s a definite hint of Redcurrant and that pithy greenness you get from Gooseberries, and underneath the kettle-soured Berliner Weisse sparkles with a lip quivering tartness.
Very good indeed, and as I’ve only ever seen mention of a Chuckleberry once before, Hawkshead have unwittingly given me the chance to post a song by some friends of mine, a band that I used to love in my late teens and early twenties.
Cheers.