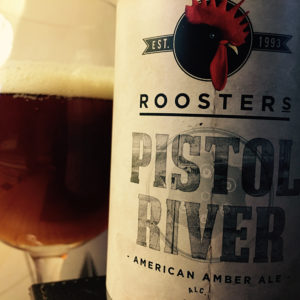 A limited edition release from Roosters, Pistol River is an Amber Ale whose smell is a little bit disappointing.
It’s a thin and insignificant pencil shavings and strawberry aroma that wafts up from this light amber beer.
There’s something a little bit odd going on in the flavour too.
It’s not unpleasant it’s just odd.
Very odd.
You see, amongst the dry pithiness of the hops, all lemon zest and sapling wood, metallic herbs and orchard leaves and the subtle caramel wafers of the malt there’s scrambled eggs.
Yes, you read that right.
There’s a very odd scrambled egg flavour floating around in Pistol River, and at its edges there’s a lightly sulphurous matchstick thing too.
All in all it’s a beer I won’t be returning to in a hurry, a beer that’s nowhere near the standard that I know Roosters can brew.