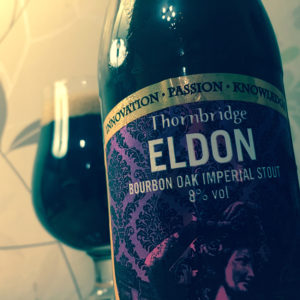 What exactly is it that people find so great about Thornbridge?
I just don’t get it.
This Bourbon Oak Imperial Stout pours a nice enough purple brown but lacks any discernible aroma save for the weediest treacle tart smell.
The malting gives you toffee and some watery black coffee, digestive biscuits and bran flakes and there’s the softest hit of hedgerow hops that add a herbal snap to the edges of the beer.
But the addition of Demerara sugar just makes the beer overly sweet, and I find Thornbridge’s beer far too sweet anyway, and this makes the Bourbon Oak taste rather chemical and fake.
In fact it tastes a lot like Innis & Gunn whose beer I can’t stand.
No, I really don’t get why so many people think so highly of this brewery.