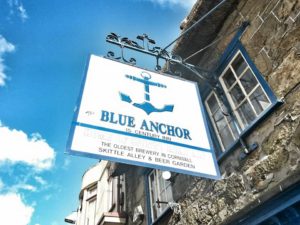 After watching Wealdstone end their season with a 2-1 win away to Truro City eight of us ploughed into the back of a taxi van for the 25 minute journey from Truro to Helston for a visit to the Blue Anchor, home of the Spingo Brewery.

The Blue Anchor is one of the oldest original Inns in Britain that continues to maintain a working brewery and brewing has taken place on the site for over 600 years. The main part of the pub is split into two areas both sharing the same bar whilst there is a large side room where we were fully ensconced. Moving to the back (and past the toilets which would have graced 1980’s non league football grounds) there was an outside bar with a large covered area for bands and seating.  When we first arrived the pub was pretty busy and we waited patiently to sample the beer I have been hearing about in hushed tones for many years. 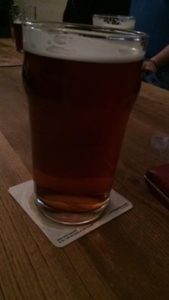 up to it’s name tasting somewhat bland given I was expecting a hoppy beer coupled with citra and floral aromas. It did thankfully improve when there was a change of barrel later in the evening.

I then switched to the Jubilee IPA (4.5%) which was a refreshing pint. However the beers did start a debate within our group.

10 years ago we would be enthusiastic about the beers on offer here but I guess some of us have been spoilt of late expecting more going on in our pints thanks to the abundance of breweries, hops and beers around these days. That said the beer, aside from my initial pint, was consistent throughout the evening and were excellent examples of classic British beer styles.

After a trying a pint of half and half of my first two (the pub offers blends of it’s beers) I settled down back on the now improved Flora Daze for the rest of our evening. Others in our group tried Middle (5%) which was far to sweet for me and the medicinal Special (7.4%) which was on par with a liquid anesthetic.

The Blue Anchor is certainly worth a visit if you are in the area.

Other places we drank in:

Hub. This is a burger bar by the harbour front in St. Ives that also serves craft beers having five on keg. The Harbour IPA was very nice indeed. Very packed (and loud!) on the Saturday night.

The Old Ale House. Excellent Skinners pub in the centre of Truro with most of their range available. The Porthleven (4.8%) was in tip top condition as was the River Cottage EPA (4%). Very friendly staff and locals.