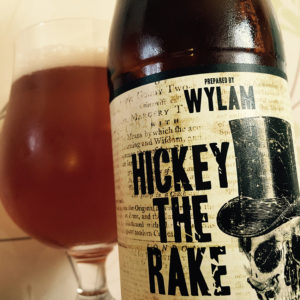 I’m not quite sure why this is described as a Limonata Pale, as if there is any lemon juice in here I can’t find it.
That’s not to say that this is a bad beer, not in any way.
Hickey The Rake is a very good little Pale Ale that pours a pale gold and smells of lemons and honey.
The malting provides a soft caramel and wafer backbone, it’s light and subtle but chewy enough to satisfy, and the hops give you a snappy fresh green herbal leaf bitterness, some lemon rind and grapefruit.
But it’s not the zap of fresh lemons that the beer suggests, instead it’s just a good sherbet tinged slap as you head toward the crisp bitter finish.
Very good if not quite as described.