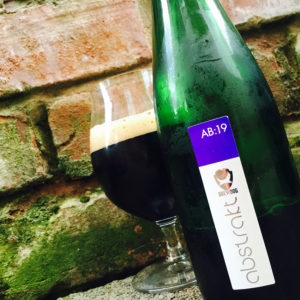 AB:19 is a blend of two Imperial Saisons, one black and one red, which has then been aged in rum barrels, and it smells fabulous, all warm boozy plums and just a hint of sharp clean gin.
Taking a swig you can’t really talk about malts and hops and all that stuff, because this is a beer that is so deep and dense it can only be looked at as one enormous hit to your senses, unfolding and expanding as you drink.
So you find lots of treacle tart in the background, rum and bitter dark chocolate, a hint of black coffee, prunes and fresh rolling tobacco.
And that’s just the beginning, because as you dive deeper you find a refreshing sprig of mint, some kaffir lime leaves, vanilla and coconut, and then a soft damp and delicious mushroom woodiness seeps in making the beer feel meaty and earthy, rich and round and sumptuous.
I could go on, but I think you get the idea.
Superb.